The Zombies at the Bar 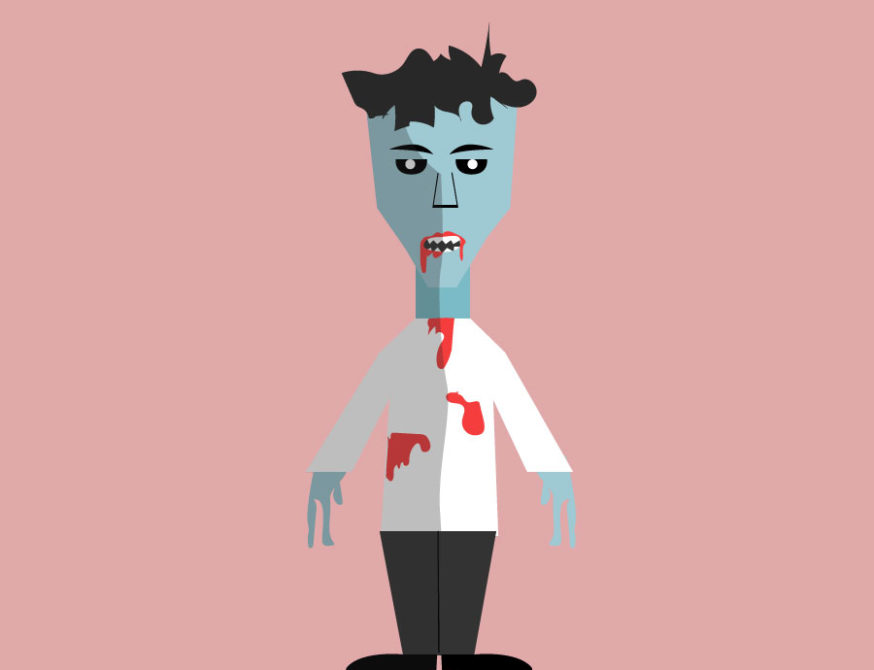 Marnie has a new boyfriend. She’s meeting him after dinner. We pick at our beef chow fun and braised eggplant the way you do when you’re full but don’t want to stop eating. Want to come with? she asks. I have no plans aside from watching Netflix and ordering random things on Amazon. It could be fun. But so could my original plans. I pick up a rice noodle. I have been wanting to meet him. Okay, I decide. She smiles broadly.

The first place we go is a restaurant where we walk in and sit at the bar. Dan, the new boyfriend, is the exact build that Marnie described. I’m impressed by her descriptive accuracy, but before I can tell her she would do well describing someone for a police sketch, Dan’s friend makes a comment about Marnie’s weight.

“What happened?” he asks.

He holds his hands wide out in front of him, then slowly brings them a few inches apart.

“You lost weight,” he says.

Marnie gives me a look.

“She’s happy. There’s nothing to feel bad about,” I say.

He says something about there being more to love before. I pretend not to hear and busy myself with reading the menu.

“What would you recommend for something light and fruity?,” I ask. “The Union Sour or the Mai Tai?”

The menu describes it as having a passion-fruit-cream finish which does sound delightful. The bartender disappears for a few minutes before walking a murky glass towards me. One sip in, and it is neither light nor fruity. The cream-top sits like old sea foam in a mess at the edge of the glass. I decide not to incite any attention over my terrible drink and take the tiniest of sips.

“I like certain ones,” I say. “Have you seen Baby Cobra on Netflix?”

“Yeah, nothing like seeing someone you went to school with on TV to know how far you haven’t come,” I joke.

He stares at me blankly.

“Can you please get a new drink? It’s paining me watching you drink that,” he says. Apparently, my invisible sips aren’t fooling anyone.

The bartender comes by to check on the two girls sitting next to us. They also have the sea-foam drinks.

“She hates her drink,” the friend calls out after the bartender.

“It’s fine,” I say and pretend to vigorously drink it.

“We should just take shots. What do you drink?” Dan asks me.

Just in case, I text my sister where I’m at and ask if I can crash at her place if I need to. She texts back: You’re brave. There were three shootings around there this week.

The night is off to a classy start.

We leave for the next place. There is a line outside, but we get in quickly. I follow Marnie who follows Dan and his friend to the back where there is a mass of people. The music is blaring and everyone is standing with their backs to us. Time freezes and no one moves. We are in a zombie movie. I wait for them to all turn towards us at the same time, revealing their bloodied mouths and pale skin. Instead, a girl walks past us, hitting the play button on the scene. Carrying two drinks in her hands, she makes her way back through the crowd towards the front of the room. It clicks then that there’s a bar back there. We’re just getting more drinks.

Marnie orders me something orange and actually light and fruity. I am touched and bumped from every direction and decide we are in a zombie wasteland after all. There is something else. I noticed it when we first came in and the entire way walking to the bar. I am a head taller than everyone in the room. Never mind that I’m 5’3”. All that matters is that here I’m a gazelle! I am a supermodel! I let it go to my head for a second, enjoying that which never happens. I think of Alan. I like feeling for a minute how he must have felt everywhere he went, towering above most at 6’2”.

Three guys along the wall do nothing but stand and stare with hungry eyes. They look like the type to refer to women as “females.” A group of girls sings along to Rihanna’s “Work.” Who knew there were words besides work, work, work, work, work?

Marnie leaves me to find the bathroom.

“Come down here much?” Dan asks.

“Not really. I used to go to one place though,” I say. It’s not the entire truth but not a lie either. I’d been there at least a few times. “Loft. You know it?”

In my head I think it might be more fun than standing next to the three guys man-handling all the females with their eyes.

When Marnie returns, we finish our drinks. By now, my orange drink has kicked in. While everyone downs shots of something, I quietly enjoy the swish of my insides rocking on a gentle sea. The kind of place you can go for a warm swim. I turn down drinks offered to me. There is a fine line between this and having my head collapse.

We go outside and then we just stand there. I wonder what we are waiting for. After tugging at my hand unsuccessfully, Marnie leaves me again to get an ice cream sandwich with new friends she’s made. When she comes back, I convince Marnie we should walk to Loft. There’s a dance floor there. I hate standing around doing nothing.

Dan’s friend and I start walking, and Marnie and Dan follow behind us. As we turn the corner, Dan stops and heads back towards the street. Marnie chases after him. I stand with the friend, neither of us knowing what’s going on. We make small talk. He is turning out to be okay.

“He just left,” Marnie says when she returns.

“Yeah, just got in an Uber and went home.”

The warm island I’m on softens how I might have felt about this otherwise.

At Loft, we make our way to the dance floor. I feel the music reverberate through me and dance like I’m in a music video, a tasteful one. I imagine Alan there, too, dancing without a care in the world. Someone grabs my hips and presses his pelvis against me. I haven’t had someone try that in forever. It almost makes me laugh, but instead I turn around and shake my hand between us, like a parent who has to hide her amusement when disciplining her child. He backs up. Marnie is lost in the music video too. She doesn’t notice the grinder. It surprises her when the grinder’s friend backs his butt up into hers. I see him coming at her from the corner of my eye, but I don’t warn her so I can see her reaction. She whips around and mouths a big “NO.” Maybe she says it too, but I can’t hear it over the music. He moves away but, in a ballsy move, doesn’t leave our dance circle. He just gets really into the music.

Another guy joins our group. He looks like a recent Indian immigrant. Did he even come with anyone? People are so courageous. Next to us a couple are dancing. He has “Blud Life” printed on his shirt. I wonder if there is a tie to the gang and try not to bump into him too much.

When the streak of good songs ends, we leave the dance floor. The grinder’s friend and the immigrant get absorbed into somebody else’s music video. At home, I notice a stain on my shirt. Someone has spilled an orange-pink drink on me. I drop my keys by the front door and am glad I remembered to buy more laundry stain stick on Amazon last week.