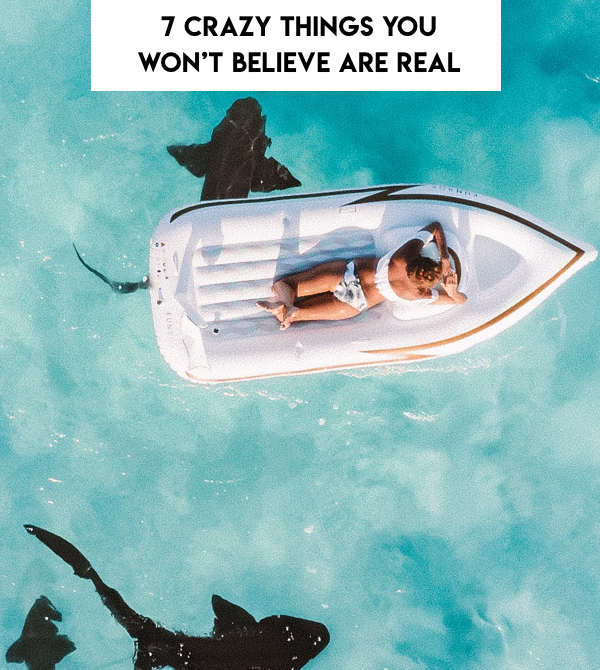 Every time I learn about a new crazy thing, the feeling I get is always the same: Like anything could happen. It feels a little bit like being inside a movie, except the movie you’re in is your own life and something truly delightful or terrifying could be waiting just around the corner. It’s just enough to jolt you out of your everyday routine, to keep you on your toes. Which is why “Want to hear something crazy?” is one of my top favorite questions.

It’s like the first time I learned about sinkholes. My sister Sophie, the master broadcaster of doom-and-gloom news, asked me if I’d heard what happened in Florida.

A man was at home when he heard his brother—who was asleep in his room—scream for help, she said. But by the time he got to his room, his brother was nowhere to be found. He’d been swallowed by a sinkhole.

A sinkhole? I asked. What’s that?

It’s when a huge hole opens up in the earth, she said matter of factly.

What? A hole opened up in his house? Out of nowhere? I couldn’t believe it.

It sounded like a cover story from The National Enquirer.

I’m serious, she said. Look it up.

But it was too late. I already had my phone out. It was true. A man had been swallowed alive while fast asleep at home. And that was when my worldview of feeling safe and cozy tucked into my bed each night changed forever.

This month, I learned about seven more crazy things. Some fun, some horrifying—all of them guaranteed to make you think about things a little differently.

1. A woman thought she had dirt in her eye. It turned out it was bees.

Doctors discovered four bees living inside a woman’s eye and feeding on her tears. She was cleaning a relative’s grave when the insects, later identified as sweat bees, unknowingly flew into her eye. When the pain didn’t subside, she went to the doctor. “I saw something that looked like insect legs,” her doctor said, “so I pulled them out under a microscope slowly, and one at a time without damaging their bodies.” 😳 While sweat bees don’t attack people, they’re attracted to human sweat and are often found near graves.

If you thought Jaime Lannister was impressive for serving in the Kingsguard with just one hand, wait ’til you hear about Sir Nils Olav who is the colonel-in-chief of the Norwegian King’s Guard. Missing not just one hand, but two, the king penguin and all his flippered glory was knighted in 2008 by the King of Norway. He lives in the Edinburgh Zoo.

3. Insomnia can be fatal.

Fatal insomnia is an extremely rare sleep disorder that is typically inherited and results in death within a few months to a few years after onset. It starts with a case of insomnia that eventually turns into never sleeping again. According to the BBC, “the closest they get to normal sleep is a kind of mindless stupor – not quite asleep, but not quite aware, in which they mindlessly mime their routine daily activities. …in some ways, it looks like they are acting out dreams. [One doctor] remembers a woman, Teresa, who would mindlessly mimic the action of combing someone’s hair; she had been a hairdresser before the disease struck.”

4. Someone has finally found a way to make the dentist less terrible.

My friend Devrie left work one day for her dentist appointment looking a little frazzled. I’d had my gums jabbed at. I’d been accused of not flossing every day. I knew what she was preparing for. I’d feel frazzled, too. But when she came back a couple hours later, her face was softly flushed and there was nary a worry-wrinkle in sight. I learned she’d just been to this dentist that combines spa services with each office visit. After your treatment, you can pick from complimentary reflexology to aromatherapy to a jaw, neck and shoulder massage. What a brilliant idea!

5. Working yourself to death is so common in Japan that there’s a word for it: karoshi.

The Washington Post says, “In Japan, there’s not even a term for ‘work-life balance.’ What there is, though, is a word for ‘death by overwork.’ …every year here, hundreds, maybe thousands, of Japanese people literally work themselves to death.” Affecting many young (and otherwise healthy) people in their 20s and 30s, karoshi can happen through a heart attack, stroke or suicide. One 24-year-old woman who committed suicide from the stress of overwork told her mom she slept just 10 hours a week.

6. Scotland’s national animal is a unicorn.

7. Scientists have grown tiny human brains that they implanted in mice— and they worked.

Lentil-sized mini cerebrums created from human stem cells were successfully implanted in mice. “The mice behaved just like others of their kind, as far as scientists could tell, and they also looked the same,” according to Scientific American.

Leave a note in the comments! I’d love to hear.