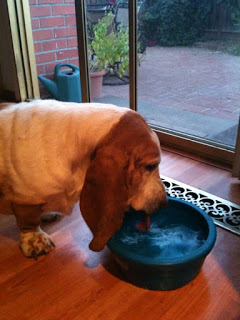 Because Alan is used to having someone around all the time from his 2 month stint in the hospital, we are staying at his parents’ house where his mom and Bilbo can keep him company during the day while everyone else is at work.

Although my commute is now almost 3 times longer, there are some very enjoyable aspects of living at Chez Bilbo.

1) We get to visit with Bilbo himself. For a canine leading such a simple life, he is endlessly amusing to watch. Every night I’ll watch him lie down next to us and notice through new eyes how his front legs are barely the length of granola bars. Or how he will take a mouthful of kibble from his bowl, run away with it (because he rightly knows how much we covet his food) and spit it all back out so that he can eat them one by one. Watching and listening to him drink water while his ears droop into the bowl is also a pastime favorite.

2) We are right next to the lake which is great for walking around and gawking at the glimmering surrounding homes.

3) I am more relaxed. This thought dawned on me when I noticed that I couldn’t see the floor of his room. There are about 8 “Patient Belongings” bags scattered around, and spilling out of them all are books, half the medical supplies in hospital supply rooms, shoes, shirts, underwear, plastic tubs, you name it. And on any flat surface above the ground are our wardrobes in towering, wrinkled heaps.

Each morning I wake up and carefully tip toe around everything on the floor to make my way to the clothes mound. Then I will shuffle through, making another, smaller mound next to the larger one, placing unwanted clothes there. I might need to sift through the large heap a few times to find the article of clothing I’m looking for, but eventually I will stumble upon it. It will more than likely be wrapped up in an XL Sharks t-shirt that smells like chimichangas. This will remind me to bring something to eat for lunch, and for this I am thankful.

All was going well until I got a reality check last night. With my glass of water in hand and my mind winding down for a good night’s rest, I walked in the room and stepped on a land mine of syringes left on the floor directly in front of the door. The hospital had given Alan a small chest’s worth of syringes, and he must have decided to unpack them and place them in a convenient spot where people’s bare, exposed feet were likely to be. I’m glad the hospital gave him so many (although I

don’t know why they did; he hasn’t used one since he’s been home) because otherwise I would not have felt it as much when I stepped on them. Have you ever seen a syringe? They are not at all shaped like fluffy marshmallows. No, they are pointy and aggressive and make people shout at other people’s mothers — oh mother of Pearl!– when they are stepped on.

Normally, the situation would not have come to this. If we were at our duplex, at least 60% of the floor would be showing at any given time. And if that dropped down to 50% or so, you can be sure a never-ending nag fest would be quick to ensue. A nag so persistent, so annoying (a life skill I picked up from my mother), that immediate action would be taken to remediate the disorder.

However, we were not at our duplex, we were at Alan’s parents’ house. A place where I feel much better about letting disorder exist because it is not actually my place, but a place that I am just visiting for a short while. I am a new person here, a relaxed, calm, “anything goes” visitor.

I proceeded to step on the syringes a few more times (see what being too relaxed does to you?) and in all my pain and one-legged hobbling, I realized that we wouldn’t be here forever. We would eventually go back to our normal lives living in our normal duplex. So I decided to teach Alan a lesson to prepare him for life back at home. And if I was going to get a foot full of sodium chloride, I sure as heck wasn’t going to go down alone.

I carefully pushed the mad pile of syringes more directly in front of the door. Then I waited for him to come in or go out, stepping directly on them as I had, and to start swearing, falling to the ground in sheer agony. To my surprise, it hasn’t happened yet. I swear the man has soles of pure stone. Either that or the amazingly light feet and agility of a ballet dancer pas de bourrée-ing around the booby traps in the room.