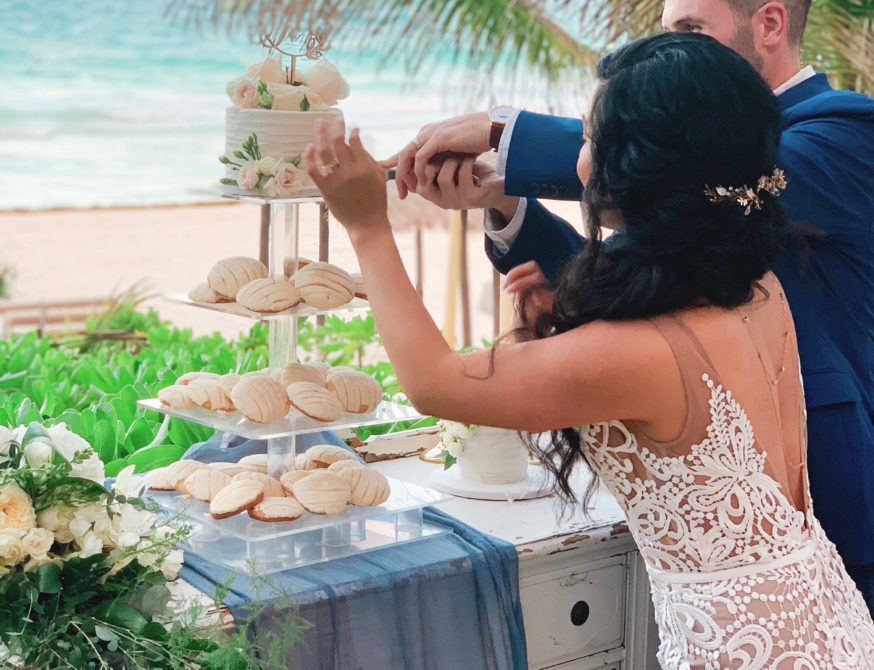 Last week, my family and I were in Tulum for my sister’s wedding with exactly 17 people. Sophie and Jordan rented out NEST Tulum, a beautiful hotel right on the beach, and it felt like a big family vacation. Every morning, we’d roll out of bed and all eat breakfast in their open-air restaurant while staring out at the crazy-blue ocean. We bobbed in the waves in the afternoons and ate fish tacos at night. It pretty much ruined me as far as destination weddings go.

There are destination weddings and then there are Tulum weddings.

Here are some of the highlights and behind-the-scenes…

In the morning, Sophie and Jordan got ready at Nomade, which they joked was Influencer Camp because of all the influencers taking pictures everywhere/yelling at their significant others to take better pictures.

A small thing (because sometimes that’s all it takes) that helped Sophie instantly feel more relaxed and assured that morning was seeing herself with these Lilly lashes on. “I felt glam but still somewhat natural,” she said.

In a rare move, my mom brought a wig to wear (she normally doesn’t wear one and is nearly bald; Sophie thinks she has alopecia). Interestingly, she brought a brown wig (even though she had black hair back in the day), and then asked if the hair stylist had a black spray she could borrow to color it with. (She did not.)

My mom and I helped Sophie get dressed in traditional Cambodian wedding clothes, while my dad helped Jordan into his outfit. Sophie wanted all the guests to wear white, too, so I wore this Likely dress, which I loved.

As part of the Cambodian wedding ceremony, Sophie and Jordan gave a fruit offering to each set of parents. Then each guest tied a red piece of string around Sophie and Jordan’s wrists for good luck.

At the end of the Cambodian ceremony, we all gathered around Sophie and Jordan to watch them play a game. The objective? Eat the fruit dangled in between them without using their hands. It’s hilarious and embarrassing and my favorite part of a Cambodian wedding.

The American ceremony took place on the beach in front of NEST. Everything was gorgeous (the benches! the flowers! the sea!) James and I got to the beach early and tried to stay out of the way, so we sat off to the side next to the sun beds of the neighboring hotel.

While we waited for the ceremony to start, a girl one sun bed over started having a full-on seizure. You know how almost nothing in real life ever looks how it does in the movies? This was not one of those moments. This was a scene from ER.

James ran straight over to help, while I stayed frozen a good five feet away. (I’m terrible in emergency situations). Finally, I ran to tell a hotel staff member to call an ambulance. By the time I came back, a whole host of people had gathered and all eyes on the beach were on her.

One guy walking by stopped right next to her to gawk, pausing only long enough to sign the cocktail bill a waiter held out for him. Almost as awful, I wondered for a split second about the start of the wedding. What should we do? But eventually, she came to and was escorted back to her hotel. (The next day, we saw her again—sunbathing topless and going on a bike ride and living her best life—and talked to her to make sure she was okay.)

Later, I asked Sophie what she thought the hold up was. She’d been told someone had fallen and hurt their leg and needed to be taken by ambulance. “That didn’t freak me out ha,” Sophie said. “I was just like oh ok.” (How relaxed!)

The moms were the first to cry, and then it was game over for me. I don’t know when I got so emotional at weddings, but I can’t stop!

Sophie and Jordan wrote their own vows, which were really funny and cute.

Afterwards, we took family pictures, drank margaritas, ate a big dinner straight out of Pinterest and had an epic dance party.

Dress: Made with Love from A&Be Portland

p.s. Planning a trip to Tulum? Check out one of my latest travel guides for 25 Instagram-Worthy Things To Do In Tulum.