How Do Foot Peels Work: An 8-Day Journal (With Before & After Pics!) 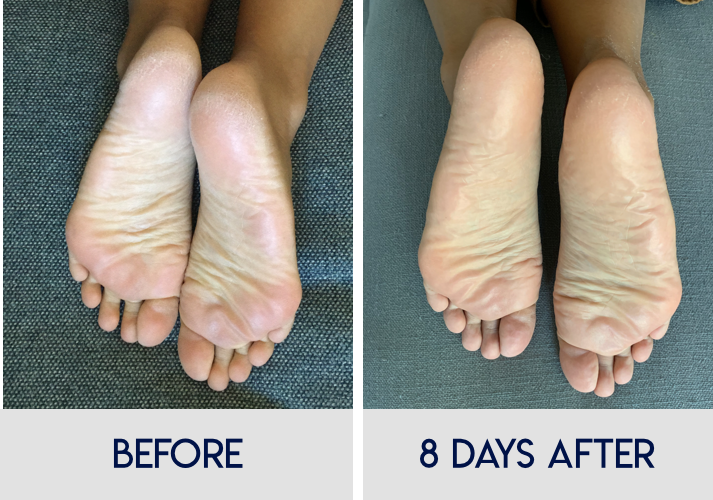 Wondering how do foot peels work and if they could be the miracle-worker to save your dry, cracked heels? I tried it and recorded it for your jaw-dropping pleasure. Keep reading or watch the video below to see what happens over the course of a week. (Guaranteed to make you laugh and gasp!)

When I asked my friends what I should do to get rid of my dry, cracked heels, a handful swore by foot peels.

“It sounds gross,” my friend Georgia said, “but it really works.”

My cousin Nathalie described it by saying, “It’s weird because it separates the dry skin from your normal skin. Like when you put glue on your hands and peel it off.”

When she followed up with a picture of all the dead skin that had peeled off of her husband’s feet, neatly collected on a piece of paper, I was almost sold.

“Does it hurt?” I asked, thinking about those times when you overzealously peel a hang nail and the pink skin underneath screams how much it hates you for exposing it to the light of day.

Not at all, she assured me. And so two days later, I had a three-pack of foot peels and recruited James to do it with me.

But first, a story about pizza and a shower

There’s nothing like meeting someone for the first time and discovering that they don’t have teeth. (Because, let’s face it, when you’re missing the front two, you might as well not have any.)

That’s what happened when James and I were at a wedding earlier this month.

There we were, sitting at a table in beautiful Encinitas, eating pizza. The good kind of pizza, too. Fresh from a wood-fired oven. A lightly charred bottom. And a chewy, toothsome crust.

A couple sat down next to us, and we started talking in between bites of mozzarella and pepperoni: How did we know the couple? How was Wyoming this time of year? A really delightful pair.

Which made me feel bad because the whole time, I couldn’t stop staring at the guy’s teeth. There was something about them.

And when I wasn’t looking at his teeth, I was watching him struggle to use a knife and fork to eat his pizza.

“You just gotta use your hands,” I said.

“I can’t,” he said, smiling broadly so that for the first time I could really get a good look without feeling rude. “My teeth.”

Sure enough, the bottom half of his two front teeth were knocked off. And I now saw his split bottom lip for what it was instead of the intensely chapped lips I had mistaken them for.

“I was just in the shower, lathering up with soap,” he explained, “when I slipped and fell. Hit my teeth on the edge of the bath.”

Oof. Breaking your teeth in the shower the day before a wedding? Not the kind of shower anyone expects.

And that’s kinda like foot peels. They don’t always happen the way we think they will.

My first foot peel was so crazy that I wrote all about it. And I guarantee it’s a knock-your-teeth-out-in-the-shower kinda read.

How Do Foot Peels Work: An 8-Day Journal

The foot peel feels like if you lathered a thick lotion on your feet and then slipped them into conveniently foot-shaped bags for 90 minutes. If we had calm rainforest sounds on, it might even feel like we were at spa.

Nothing new to see here. Move along. But seriously, maybe this foot peel business is a scam.

Still no signs of peeling. Unlike James’ feet. His are peeling like crazy. Actually, maybe mine are, too—

Never mind. That was just a piece of lint.

UPDATE: I check my feet again after my shower, and something incredible’s happened. I’ve turned into a snake. Or at the very least, the balls of my feet have. They’re covered in loose dead skin.

Had to leave the barre class I’d signed up for at lunch because my peeling skin was sticking to the mat. Not to mention that my feet look CRAZY. I walk to the park instead and sit on a bench. As I walk back to the office, a guy smiles at me and says, “Good afternoon.” If only he knew I’d just spent 10 minutes peeling the dead skin off my feet.

Most of the dead skin rubbed off in the shower tonight. Except my heels. That dry patch is hanging on for life.

My heels are still a mess. Filing with my industrial-sized foot grater just seems to make it worse. I question all my poor grooming habits of the past decade.

We’re at a wedding today. The leatheryness (is that a word?) of the top of my feet and ankles is getting worse.

I have accepted that I now have leathery, flaky skin the exact shape of the plastic foot peel sock that makes it look like I’m wearing snakeskin booties. James says you can’t tell and that it looks like I have sand on my feet. Sweet, but a liar. I spend part of the day in despair about my indestructible calloused heels.

UPDATE: While in the shower, I reached down and applied some scrubbing pressure to my heels (like I’ve been doing most nights). And to my surprise, tonight I finally felt some give. Something was rubbing off.

Confirming the skin on my heels really did rub off. So I’m not a monster after all. They still look a bit dry, but less cracked over all. And they feel smoother, too. I feel an extra pep in my sandaled step all day.

How Do Foot Peels Work: The Verdict

If you’d asked me if it was all worth it while it was happening, I don’t know that I would have said yes. But now that my heels are smoother (finally!) I would do it all over again. I’d even recommend it (if for no other reason than the process of having your feet peel is pretty wild).

Just remember a couple of things on how do foot peels work:

Want to learn more about my other favorite beauty tools? Check out: