They say when one door closes, another one opens. I’m starting to think that that may be the same way habits work – kick one habit to the curb and pick up a new one. Since Christmas, I have had about 2 cups of regularly caffeinated coffee. Other than that, I’ve been sticking to decaf while working in the office, and I’ve been stealing sips from Alan’s regular cup o’ Joe on the weekends. It can be a little hard waking up in the mornings without the caffeine boost, but I like the liberty I feel from no longer being an addict. I can say no to caffeine like I never could before. It’s like I’ve taken my life back into my own hands, free at last from the highs and lows of espresso and double-brewed coffee. In breaking off my long standing relationship with coffee (a substance that once co-existed within me like the air in my lungs), I also realized that I was no longer addicted to anything. Or so I thought.

On Saturday, I had the nerve to tell Irene that Alan and I went to the new Pinkberry in Santana Row, and I wasn’t sure how much I liked it anymore. The yogurt wasn’t quite as tart as I remembered and was much creamier. The strawberries weren’t as juicy, and the mango bits weren’t ripe. And where was that indescribable, hard-to-put-your-finger-on something in the yogurt that all Pinkberry lovers swore was crack? Sadly, it was nowhere to be found. At least not in my cup of fro-yo.

She looked pretty shocked when I told her this. In fact, I even shocked myself a bit with this confession. But it was more than just shock. I also felt a general disappointment. When have I not loved Pinkberry? When have I not spent my days and nights waiting for this exact moment when a Pinkberry would open in my neck of the woods? I wondered if this was what it feels like to fall out of love after 30 years of being happily married. What a terrible feeling. 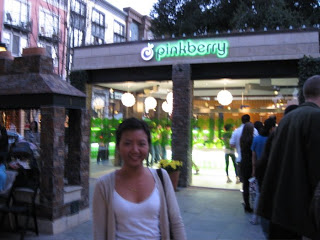 Waiting in line with higher than high hopes and expectations.

The yogurt on the far right is mine. A medium original with mochi, strawberry and mango. Mochi, as I will later find out on Wednesday, is a semi-secret topping as it’s not listed on the menu. 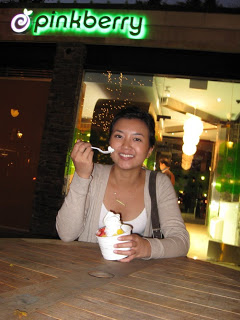 It starts off well as I sit down with my yogurt, but a few bites later I thought, “Who are you Pinkberry? I don’t even know you anymore.”

On Tuesday, a craving for the Pinkberry from my dreams attacked. I thought of the tart, tangy, light and refreshing taste I once knew so well and decided to give Pinkberry another try. Maybe Saturday was a fluke. Alan and I bundled up and made our way over in the cold. And sure enough, this time, the Pinkberry tasted just as I remembered it in L.A. You never forget the taste of Crackberry! I could feel the addiction taking hold of me nearly immediately. This must be coffee’s last joke on me, to replace itself with an even more expensive habit. 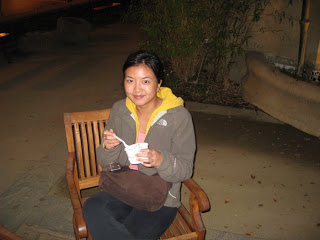 Cue music. “I can’t see me loving nobody but you, for all my life….” 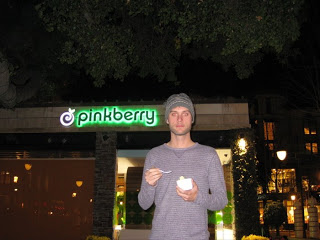 You can’t tell, but this is his excited face.

Also on Tuesday, I saw people standing in line holding these pieces of paper. It turned out to be a buy one, get one free coupon. You can print one here. I told the girl behind the counter that I’ll be coming back every day until the 25th when the promotion is over. She didn’t look too overly thrilled, but maybe she didn’t hear me…

Today I convinced not just myself and not just Alan, but also Denise and Justin to go again with me! They had never been so it wasn’t too hard. And lucky for us that we did go. Inside a tent, set-up right outside the shop, we met Ron Graves, the CEO, and Elliot, the shop owner! 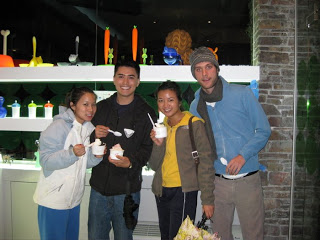 See how Justin and Denise are all smiles now? This is the monster that I am, introducing Crackberry to two innocent people. Oh, how quickly their savings will be depleted now! 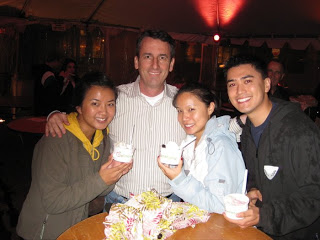 Here is the CEO of Pinkberry chatting it up with us. He was impressed we were all eating the mochi topping since that’s not listed on the menu. Then he gave us the inside scoop on another “un-listed, secret” topping – a POM shot. I think I’m going to need to try that one soon. Like as in tomorrow.

Here’s the store owner, Elliot. Real nice guy who invited us to the grand opening. Technically he’s not supposed to, but I figure I’ll just show security or whomever this picture and say I KNOW Elliot. That or I’ll point at Denise who will be cleverly disguised as Lucy Liu and demand we get some schwag.