The Thing About Family

Daylight saving time makes me happy. The afternoon’s sunlight stretches into the evening, and there is more time for romping around outside and listening to crickets. I don’t really sit around listening for crickets, but I would if I had a house with a porch and a rocking chair. I’d definitely sit on the porch listening to the crickets then, all while drinking the fresh squeezed lemonade my Ma would make. But given that I don’t have a porch and only really have a small side space outside which holds my garbage and recycling cans, romping around until 7 or 8 in the evening will have to do.

Last weekend the weather was so nice and the sky so blue, Alan and I went on a hike three days in a row. On Sunday we went to Villa Montalvo and for a few minutes I became The Girl That Thinks About Getting Married and pictured a grand canopy of interwoven white lights over the grass, with swans waddling around and the sounds of a lively wind or string band filling the air. Guests would be laughing and eating — there would be lots of eating. Lots of eating of things with confit in the name or black truffle infused something or other. But then we walked past the grassy area and started our hike and I turned back into The Girl That Thinks Only Grown Ups Get Married. 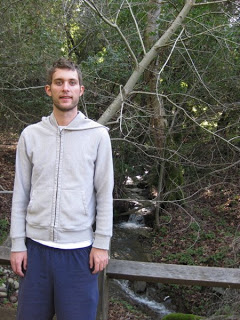 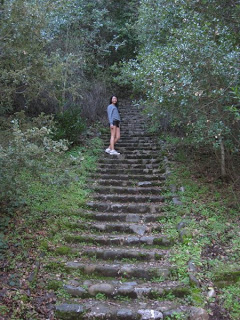 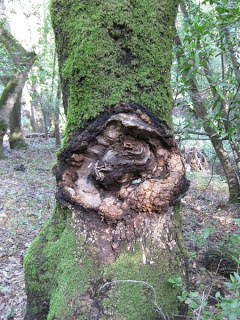 This tree reminded me of a monkey’s butt. It really grossed Alan out,
but I thought it was kind of funny.
This weekend the weather was not so nice as it was last weekend, so on Saturday we went walking through the mall so I could continue my endless search for sunglasses. As we rounded the corner from The Gap, we ran into my aunt, who I must admit I had been avoiding for some time. Although sometimes she can be fun and silly and light hearted, sometimes she makes me feel like she is peeling back my skin, pushing aside my muscles and inspecting and commenting on each and every one of my internal organs. It can be exhausting. But we ran into her and there was no avoiding it.

She looked at Alan and immediately said, “Alan, you look so skinny. Did something happen?”

Which made me look at him, then her, then him at me. It was odd to hear her asking this question because I knew my mom had already told her about Alan’s diagnosis. But since I also know that sometimes people like hearing things for themselves straight out of the horse’s mouth, I pretended like I didn’t know she already knew. So Alan explained about the cancer, and she exclaimed that he was so young, and the next thing you know we are all sitting around drinking decaf coffee and eating pizza and cheesecake.

Thankfully, most of the meal was filled with her doing the silly, fun and lighthearted thing, but then she turned serious and started talking about cancer. The highlights were:

“You know, my boys have to watch out for colon cancer, too. My husband has 2 uncles that have died from it. Yeah, they just caught it way too late and then they died.” As she said this I tried widening my eyes as much as I could to tell her that, oh you know, people with cancer don’t like hearing about other people who have died from it. But then I thought this might have made it look like I found what she said to be intriguing and that she might think I meant: That’s so fascinating, please continue. So I stopped.

“Have you prepared your will, yet?” OK, she didn’t ask this last one but she might as well have advised him to say goodbye to his loved ones now before all his hair falls out and he becomes skin and bones and shuns the light of day.

When we got home later that night, Alan said, “That was fun! Her work stories were really engaging!” And I could see from his face that he meant it. That’s the thing about those family members that you love and hate — they’re always more fun when they’re not related to you.

3 Replies to “The Thing About Family”