If You Have Something To Say, Say It To My Back

It could just be a lingering insecurity from junior high, but sometimes I wonder if people are talking about me behind my back. Particularly when I’m seated at some sort of event with whispering, pointing people behind me. It could be they are just looking past me at the empty stage, discussing what they hope will happen when the show begins and tittering in delight in anticipation. Or it could be my hair. Or the fluorescent orange plaid shirt I knew I should have saved for another day.

So yesterday at the A’s game, when Alan and I sat in front of two of the loudest, most opinionated sports fanatics ever in the history of the world, I couldn’t help but wonder if they were talking about us or if it was just in my head.

As one of the most passive aggressive people that’s ever walked the streets of San Jose, I understand subtle, passive aggressive ways. And passive aggressive tactics are everywhere. It’s so common place that it’s almost comforting. It allows us to delude ourselves a bit, to think to ourselves that if we had something to say, we’d say it straight to the person’s face. (But instead of saying it to the offending person, we’d just think it and then go eat his labeled yogurt in the office fridge.)

Sitting in front of the two East coast cab drivers yesterday was an interesting lesson in what it’s like to be the complete opposite of passive aggressive. And in a weird way, once the awkwardness of realizing that they were talking about Alan faded, it was almost refreshing. I didn’t have to spend half my mental resources watching the game and the other half worrying about if they were talking about me or the blob of bird poo stuck in my hair, because if they were, they would have immediately let me know. With half of my mental resources freed up, I could focus my attention on the things that mattered — like how grateful I was for the person who thought to toss fries in a generous coating of garlic.

The commentary between the 2 cab drivers went on non-stop for the entire game. It was almost like the characters of Seinfeld had died and were reincarnated in these 2 people. They talked about the desirability of homes in Antioch, the cheers and chants of other fans, the sugar content of the icees, children’s hyperactivity levels, the NFL draft, the skill and physical size of each of the A’s players, the weather, the weakness of the section’s cheers, and even the annoying size of the people sitting in front of them.

When Alan sat down in front of Cab Driver #1, the first thing he whispered to his friend in a shouting announcement was, “I can’t fucking see shit. I really can’t see fucking shit.” Alan didn’t seem to be too bothered by it, but I think it was because he thought the Cab Driver was talking about the guy sitting in front of me, someone so big that I’m sure he must have been blocking all of section 117’s view. 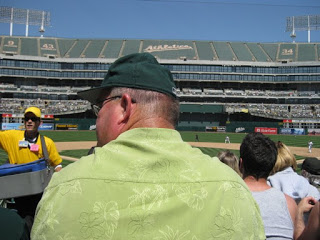 The Cab Driver made sure he let the big guy (and everyone within a 4 seat radius) know how offensive he found the big guy’s hat. When Cab Driver #2 commented that she couldn’t see either, Cab Driver #1 said, “It’s ’cause that guy’s wearing a hat right? That guy’s wearing a hat. Can you believe that guy?” In the big man’s defense, it was an A’s hat and everyone else was wearing one so why couldn’t he?? Besides, if you just maneuvered in your seat and tilted your head a bit, you could totally see part of the pitcher’s torso and a glimpse of the outfield. If you did a total neck crane and folded your body over the arm rest, the view was actually really good. 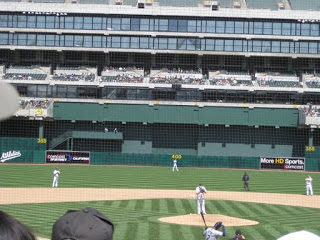 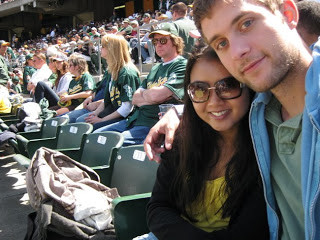