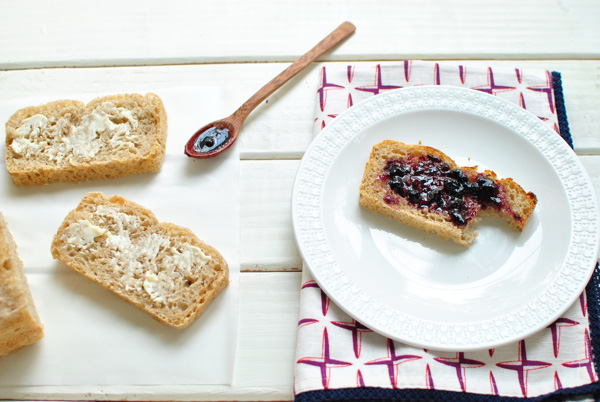 For a long time, this no-knead bread was my go-to recipe whenever I wanted to make bread at home, but then Ali shared her wheat bread recipe with me and now I have two keepers — they’re both so good. The no-knead recipe makes a more rustic, bakery-like loaf (great for impressing the host at your next dinner party), while this wheat recipe makes a good everyday loaf for things like toast and sandwiches. 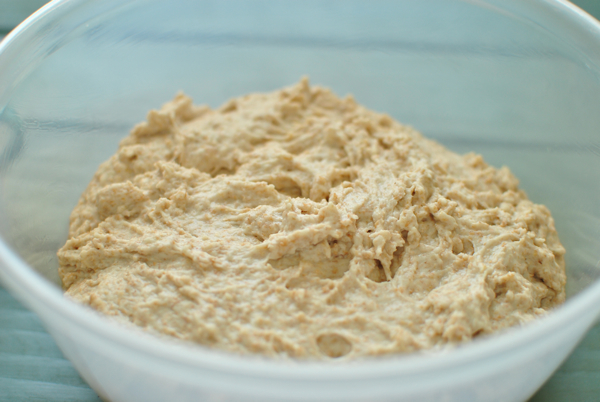 Aside from the fact that this recipe takes about 4 hours to make (don’t worry, most of that is just rise time), it’s virtually foolproof. The first time I made it, it looked like a gloopy, sticky, unformable mess. After the first step, I set it aside in a bowl and forgot about it because I had written it off as a lost cause. When I came back in the kitchen 2 hours later, it was practically overflowing in the bowl, but looked more like dough should. I decided to heck with it, followed the rest of the recipe, and out came two mighty fine loaves.
Now, this is a sticky dough. There’s just no way around it. But the trick, I’ve learned, is to not follow the measurements too closely. Just keep throwing flour in the bowl until it looks a little less gloopy, sticky, and unformable. After combining all the ingredients and kneading for 5 minutes, my dough looked like the above. 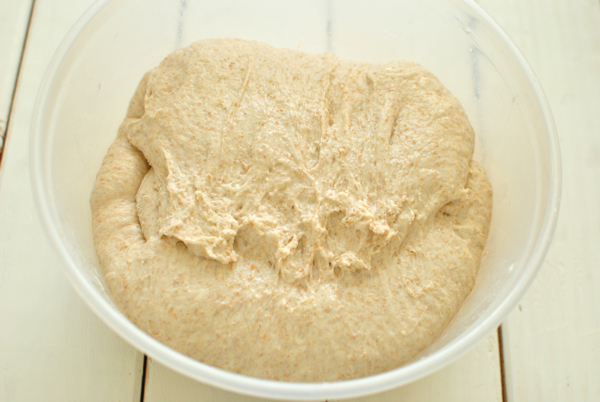 After the first hour-long rise, the dough should look smoother (and lots more friendly, don’t you think?) My favorite part is folding the dough in on itself. 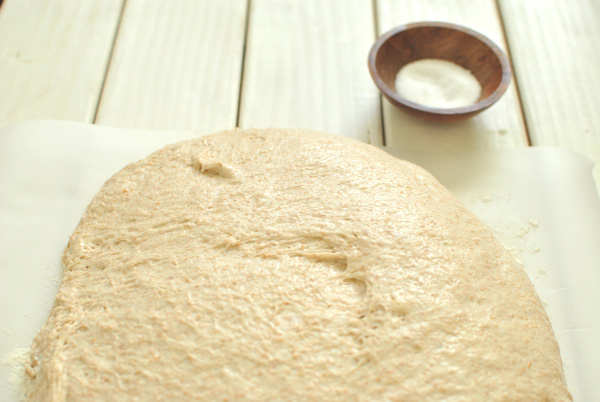 Since this recipe makes two loaves, it’s perfect for slicing up, sticking in the freezer, and pulling a few slices out in the morning for breakfast throughout the week or for dinner in the evenings. Having fresh hot toast with a slather of butter and blueberry jam in the mornings beats cold cereal any day.
Easy 5-Ingredient, 5-Step Wheat Bread
Adapted from How to Sew a Button, as told to me by Ali
3 overflowing cups whole wheat flour
3 overflowing cups bread flour (all purpose will work, too)
3 3/4 cups tepid water (2 1/2 cups cold + 1 1/4 cups boiling)
2 1/2 teaspoons salt
1 1/4 teaspoon yeast
1. In a large bowl, mix all ingredients together. Knead until dough comes together into one collective mass. Cover with plastic wrap and let rise for one hour.
2.  Oil a large bowl and set aside. Remove plastic wrap and transfer dough to oiled bowl. Fold dough in on itself, bringing the bottom edge up to the center, the top edge down to the center and then both sides into the center. Cover and let rise for one hour.
3. Dump dough onto a floured surface (or floured parchment paper if you want to avoid cleanup). Split dough into two pieces. Cover and let sit for 15 minutes.
4. Form each piece of dough into a rectangle and fold in thirds, then in half,  and then roll to the length of the loaf pan. (I found that the dough was too sticky to do any sort of folding, so I just sorta rolled it and then plopped it into the pan, and it still turned out fine. If you’ve never folded/rolled dough before (like me), you might find these step-by-step pictures helpful.) Place dough in greased pan. Cover and let rise for 1 hour. After 1 hour, the dough should rise to the top of the pan. If it doesn’t, let it sit for 30 minute intervals until it does.
5. Bake at 425 degrees in the center of your oven for 20-25 minutes. The top will be golden brown. Remove bread from oven and immediately dump loaves out of pans and onto cooling racks. Let sit for 1 hour before slicing. (Or, if you can’t fight fresh home-baked bread either, eat right away, preferably with salted butter).