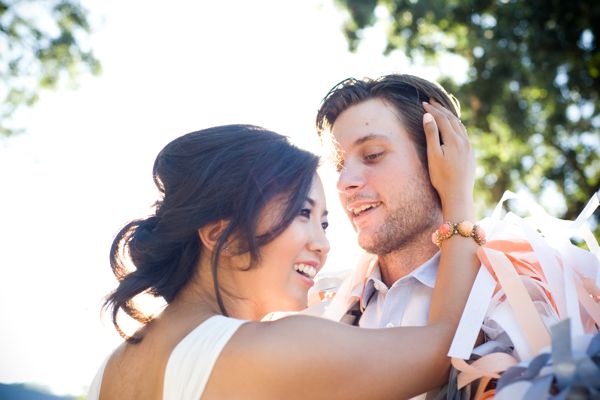 Exciting news: Tomorrow, our wedding will be featured on the Wedding Chicks blog! I’m thrilled to finally share pictures and thought it’d be fun to do a wedding-themed week with all the details behind our big day (with more pictures, of course).

To kick things off, I wanted to share our real wedding story. I thought about sending it along when I was submitting to various wedding blogs, but sometimes it’s just easier to not have to explain our situation. It was also turning the submission into a novella, so I kept things nice and short, writing mostly about our decor and advice to future brides. But I think it’s important to recognize that love is sometimes much more complicated—it’s what makes life so equally beautiful and heartbreakingly sad.

We met at a party one summer when we were both home from college. There was carne asada and mariachi. We drank beer out of red cups and told jokes, making light of the fact that we were the only non-Spanish speakers there. Alan was tall and handsome, but when he asked for my number at the end of the night, I gave him my AOL screen name. Clearly, I had no idea that I’d met my future husband. I didn’t think he’d actually contact me, a girl who’d just given him my least personal form of contact information, but he did. He was very persistent. In the end, we fell hard and fast for one another. We dated for a few years and became best friends, but eventually, the distance (he was at UC Santa Cruz and I was at UCLA) got the better of us. We saw other people, but I knew in my heart of hearts that he was the one. A few years later, work brought me back to the Bay Area. We started hanging out again and soon we were inseparable.

We were constantly doing things—hiking, biking, cooking, shopping (some of us more happily so than others), working out, watching movies. One day at the gym, Alan got really winded. We came home early, and he laid on the couch. It happened every day that week. He went to the doctor, and I was sure they would give him a multivitamin or finally confirm that he, indeed, needed to eat more vegetables. But it wasn’t any of those things—it was stage 3b colon cancer. He was 25 years old.

Ever so slowly, the cancer went into remission. One day, his oncologist told us that we could breathe a little easier: His cancer had been gone for three years, which meant the chances of it coming back had decreased dramatically. “You should celebrate!” she said. We packed our swimsuits and booked it to Hawaii.

Life started getting really exciting. The horribleness of the past few years began to fade, and we started having conversations about marriage. Alan wanted to establish his career (to ensure he’d be able to provide for me, he said) so we waited to get engaged. In the meantime, Alan started taking evening math classes at the junior college. It had been his longtime goal to finish the calculus series and pass differential equations. At the same time, he began teaching himself how to program. Every spare moment he had was devoted to studying and hacking away late into the night at his computer. He landed a job as a junior software developer, and then, less than a year later, he got an even better job as a software engineer.

Everything we had planned was taking shape. As our marriage talks became more serious, I started dreaming about the wedding—Would I wear sleeves? Cap sleeves? How would I wear my hair? I drifted in and out of these thoughts like I was floating on a cloud. Life was busy, happy and full.

A month into his new job, Alan’s team went out bowling. He laughed the next morning about how out of shape he was and how sore his leg was. He must have tweaked it somehow. When the pain in his leg didn’t get better, the doctor diagnosed him with sciatica and recommended he exercise and stretch more. This would mark the beginning of our roller coaster ride.

It took five months before they found it. A PET scan revealed a small active lymph node in his pelvis. The cancer was back, and this time, it was in a much harder place to treat.

From here, everything went quickly. We saw surgeons and oncologists and urologists all in a matter of a few weeks. They all had the same look on their faces, the kind of look when it’s stage 4 and the odds are slim. I wanted to throw up; I trembled and cried instead. The cloud I’d been floating on had been extinguished and an unforgiving thunderstorm had taken its place. It would cast a dark shadow over us for the next few years.

In the midst of all this, Alan was still taking his differential equations class, the very last one he needed to finish to meet his goal. “Should I stop?” he asked me, his blue eyes pained and searching. “Of course not,” I said, surprising myself with the confidence I projected. “You’ve worked so hard for this.”

In between work, doctor’s appointments and treatments, Alan went to class and did homework. He finished the semester with a B.

With his career established and his math classes complete, it was time for us to get married, at least according to our plan. I could tell Alan was hesitant. Later I’d find out he wondered if I even wanted to marry him anymore. But the truth was I wanted to marry him more now than ever. If we were going to go through this again, and I wasn’t planning on going anywhere, I wanted to be by his side as his wife, not just his girlfriend.

Before this, I had always hoped he would surprise me with a proposal, but when it actually happened, we talked about where we should go and what we’d wear. It ended up being something we both planned, and afterwards, we were engaged, just like that. There wasn’t a fireworks show and Beyonce didn’t jump out from behind a bush to serenade us. But that wouldn’t have been very us anyway.

For a long time I never admitted how bittersweet getting engaged was. I was afraid it would spoil things or make it sound like I didn’t want to wholeheartedly marry this man I loved so much. I was happy we were getting married, just like we’d always wanted, but there was no denying we were swallowed up by the shadows of the thunderstorm. It was made worse by the people who didn’t know about Alan’s illness. (We just didn’t have the energy to explain it to everyone). Someone asked me if we’d start having kids soon after getting married. I didn’t know what to say.

Months passed after our engagement. I kept putting off wedding planning because of all the uncertainty in our lives. Alan was constantly in and out of the hospital and starting and stopping different treatments. I had no idea what his health would be like from one moment to the next, much less months into the future. One day, I talked with my church group about my conundrum: What if the wedding day came and Alan was too sick? What would we do then?

So I picked a date, gave myself six months to plan and prayed for the best.

On the big day, Alan was in good health. We got married in a little garden at the historic Ainsley House and celebrated with our closest friends and family. That entire day, and for the week that followed, I felt light and buoyant. I was excited for us and for the future. It felt like something I’d known before but even more electric. I was back on my cloud, even if just for a moment, floating higher and higher, this time with Alan right by my side.

7 Replies to “Our Real Love/Engagement/Wedding Story”