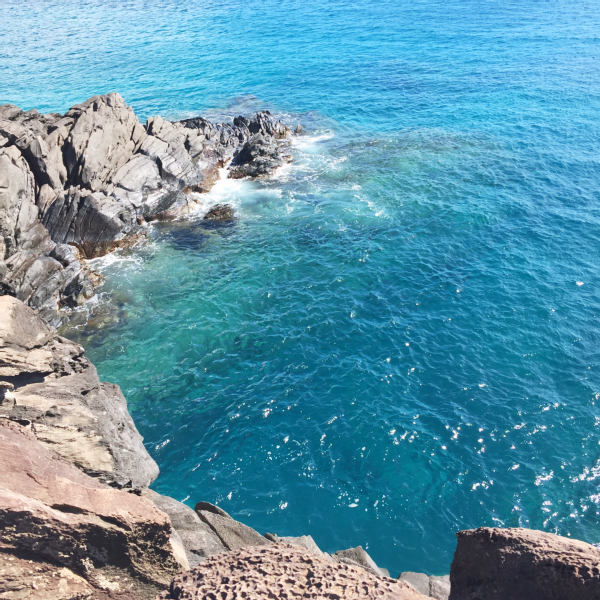 Today I am 32 years old, and in so many ways, I don’t feel it. I still get excited about going to the candy store. I have a tendency to dress like I’m five. And I have no idea how my 401k works. Then something will remind me of you and I feel a hundred years older. The door to my grief swings open and I am swept away. I am like the 75-year-old widows in the bereavement group the hospital set me up with. Except we wear different shoes. Theirs are thick-soled and unabashedly comfortable-looking. They cover every inch of skin. My shoes are strappy and offer no arch support. They’re not the most comfortable, but they’re not terrible either. The ladies in the group talk about their 50+ years of marriage, their kids and their grandkids. I tell them that you and I were married for a year and that we really wanted kids. It’s clear that I’m not 75 either.

I don’t plan beyond the next two weeks. I struggle with verbs. I say things like, “My husband is a software engineer.” I don’t know how to answer when new people ask how long we’ve been married. I look down at my hands so they won’t see me cry.

I think about all the times I asked you if you would still be with me if I was a zombie, and the way you always said yes without a moment’s hesitation. I’m sorry I told you I wasn’t sure what I would do if the situation was reversed. In the movies, staying with your zombie lover is always a futile effort. But now that you’re gone, I get it. I would still be with you. It would be worth it to be together.

I used to joke that it didn’t matter if I died in a car accident because then I’d get to be with you again. Sophie told me at some point she’d have to start worrying and taking that seriously. So I stopped saying things like that out loud. I try not to even think it but sometimes I can’t help it.

I know I promised I’d keep living my beautiful life for you, but it’s hard. I’ve gone hiking a bunch and I’ve been swimming and eating good food. I pretend like you’re still going to bust me when I’m in the kitchen late at night eating chips. It makes me laugh. Oh, and I wore the skirt you liked to Lu and Jesse’s wedding. We still have to get them a wedding gift. I want to sign the card for the both of us, but is that weird?

Anyway, I’m trying my best. Over the past three months: 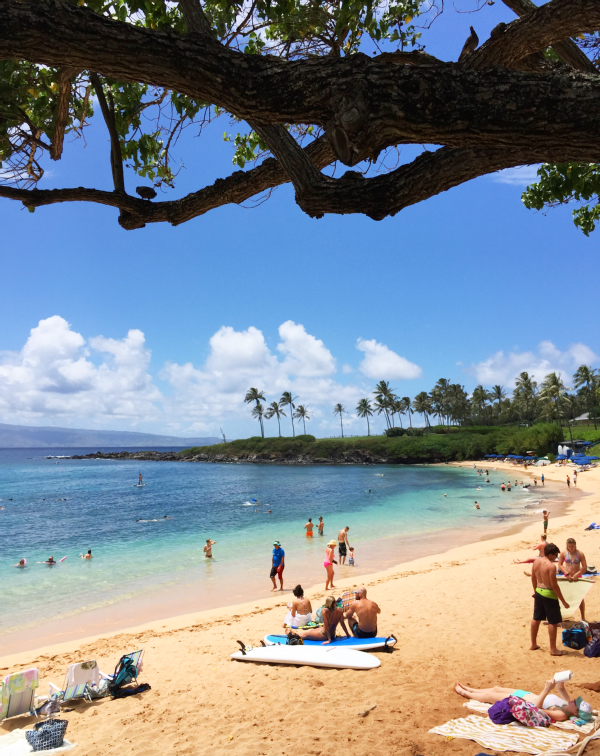 Sophie and I took the meepy parents to Hawaii. They never thought they’d get the chance to go in this lifetime (their actual words). That would sound so dramatic if I didn’t know they truly meant it. They loved sleeping by the ocean and would wake with the sun and run out to the beach. Oh, meepy parents! 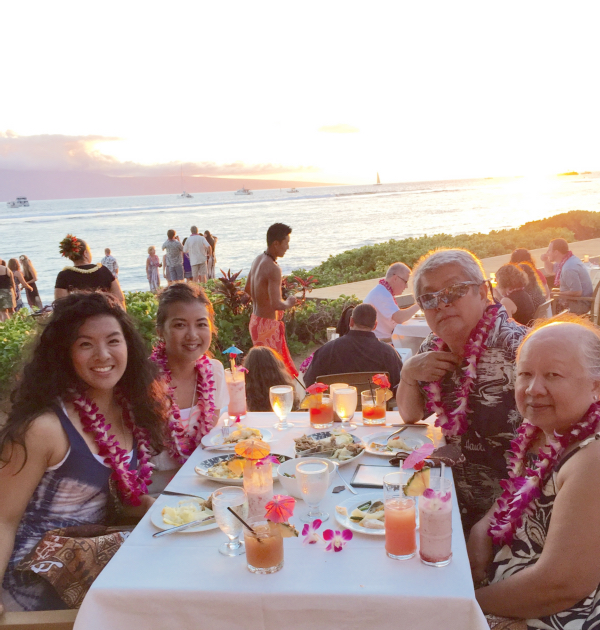 We went to a luau. You would have been so disappointed in us! (Tourist trap!) You were right, it ended up being pretty terrible, especially the food, but the sunset over the water was nice. 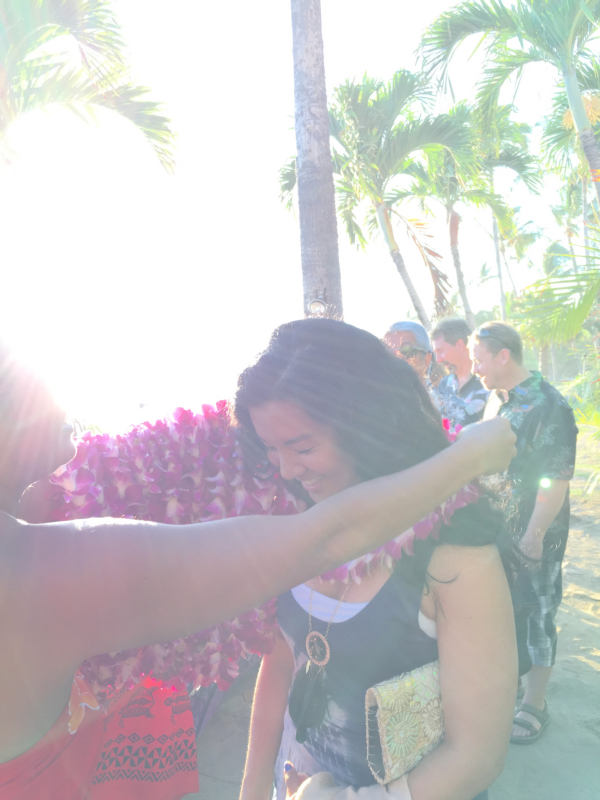 I drank a bajillion lava flows because did you know they taste like delicious milkshakes? The fact that I could drink a bajillion (read: two and a half) and not feel anything makes me think they were, in fact, milkshakes. 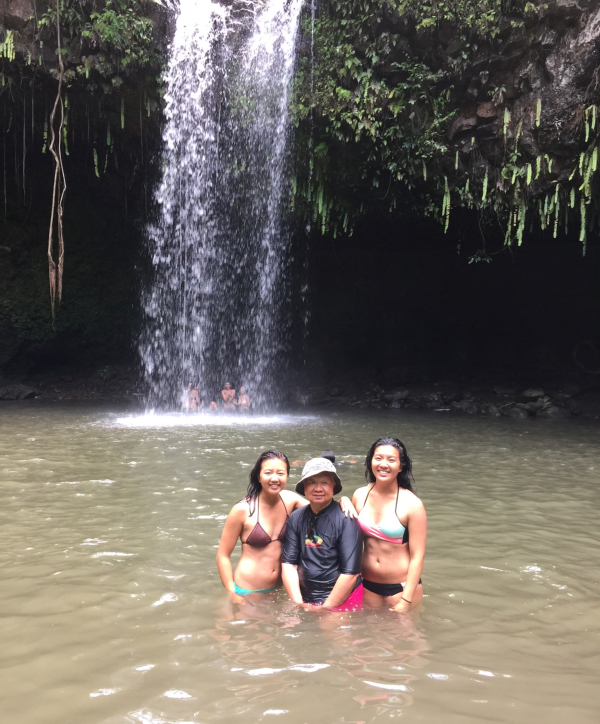 We went to the Twin Falls. You would have loved it. Before you get to the water you walk through (landscaped) jungle. Your two favorite things: water and jungle! 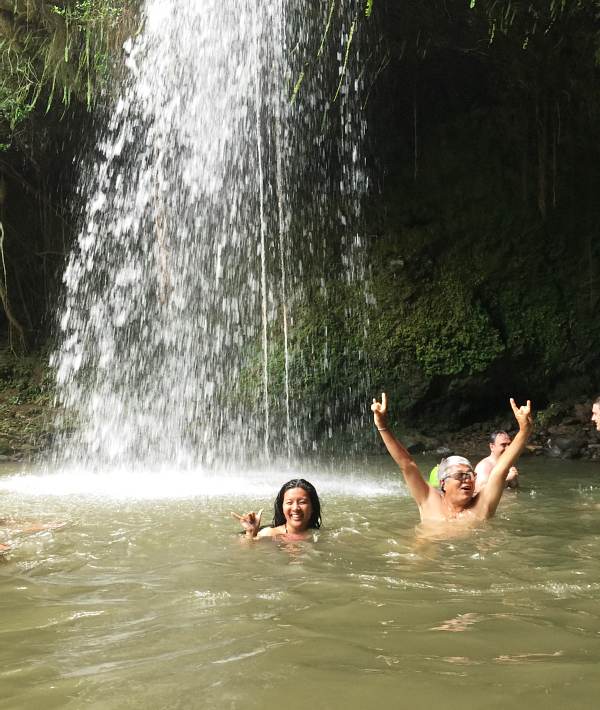 The water was chilly but you quickly forget because you’re swimming in a waterfall and you feel like you’re in a Disney movie. 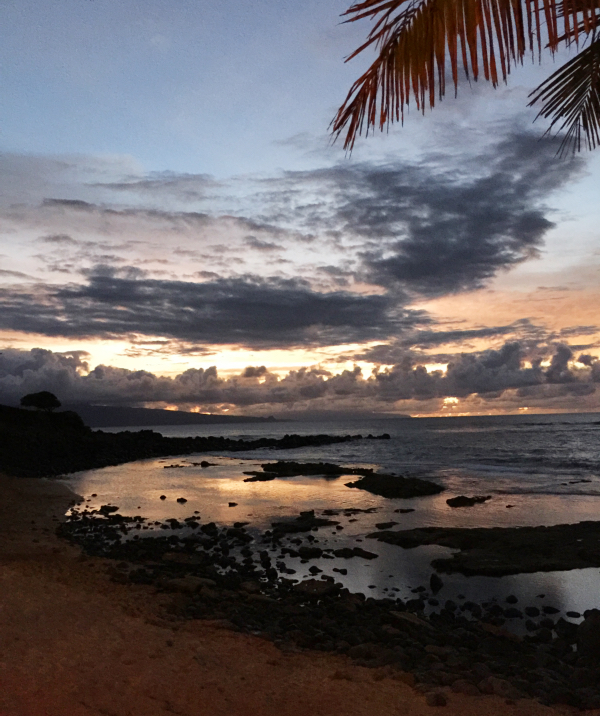 I tried to watch the sunset every night. This one was eerily beautiful. 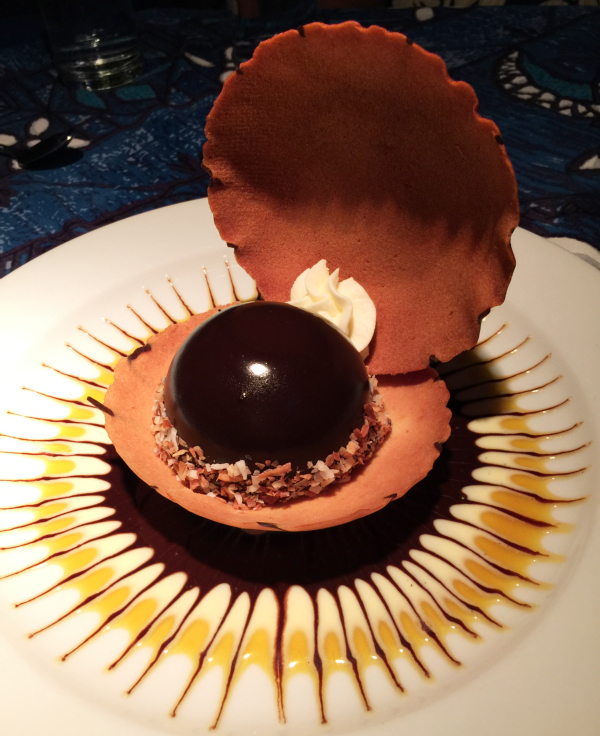 We got this for dessert at Mama’s Fish House. You wouldn’t have liked it because of all the chocolate, but isn’t it pretty? p.s. I’ve had better fish at Nick’s. 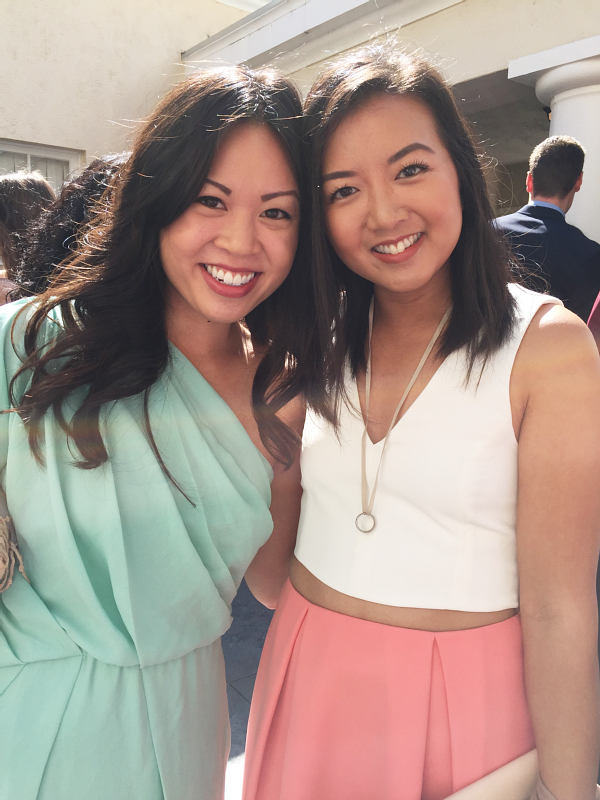 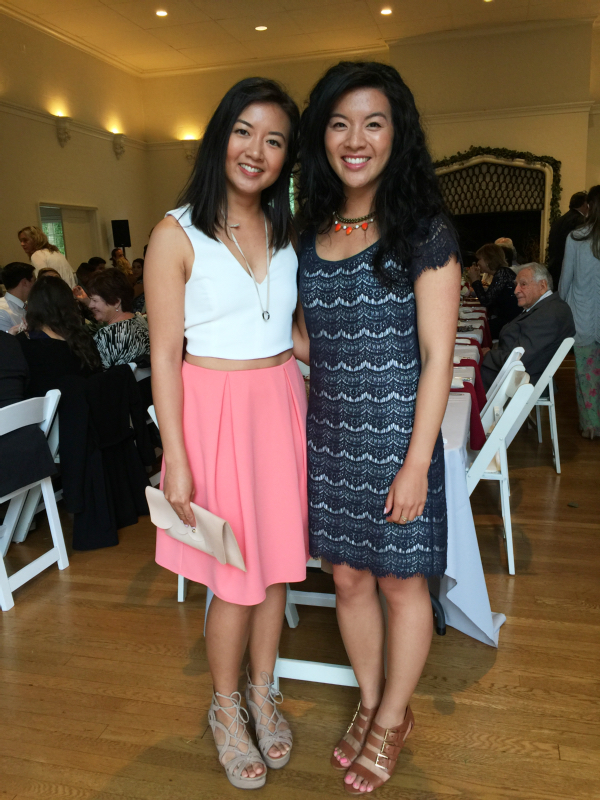 Lu and Jesse got married. I wore the new skirt I showed you. You called it a “fun” color. I love how everything is fun to you, from car rides to colors.

Everyone coincidentally wore petal pink nails and nude shoes. It was fun. 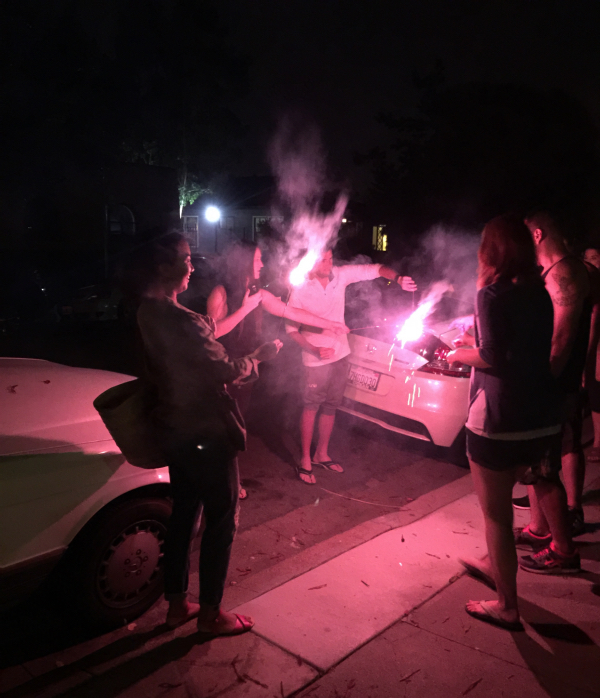 We celebrated the Fourth of July on the Leclair’s new rooftop deck. The view of the fireworks was great, and we didn’t have to deal with any crazy crowds. Grace brought sparklers because they reminded her of you. What a sweetie. 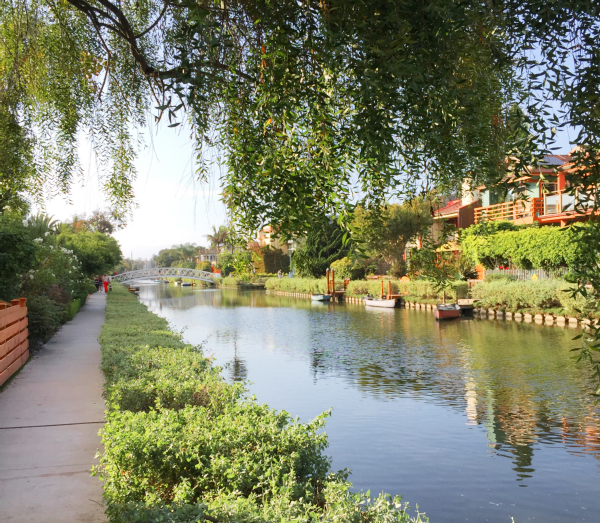 I visited Roy in L.A. and we ate so much food. We also spent a lot of time looking at cute things. You would have been so happy for me. I wish I could have shown you the Venice Canals. Roy and I both saw them for the first time, and he’s lived there his whole life! 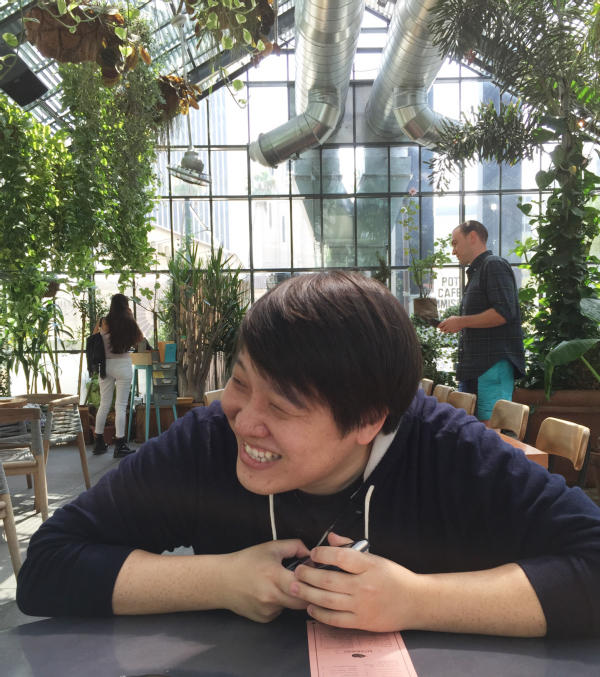 One morning we had brunch in a greenhouse which I know you would have loved. 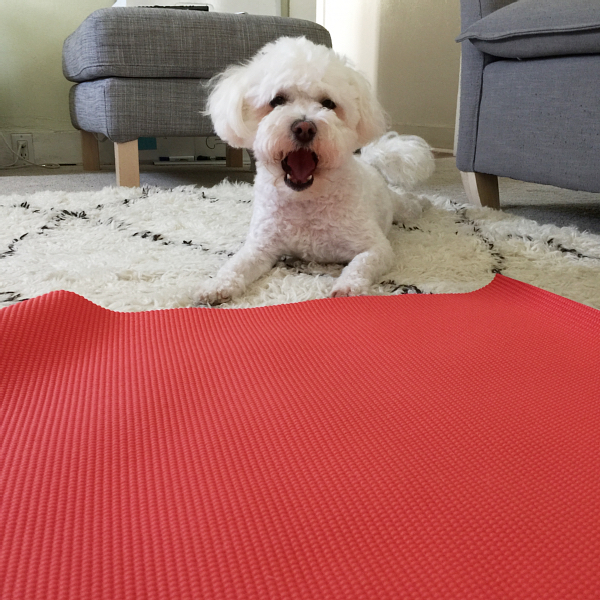 Petrie stayed with me for two months because the meepy parents “wanted me to have a friend.” At first I was scared I would forget to take care of him and he would accidentally die, but it was nice having him around. Do you know how many weird people stop to talk to you when you have a dog? So many! One lady kept talking to me about the guy that pulled out a chainsaw and was threatening everyone in her apartment complex. At first she made it seem like she just wanted help finding this karate studio, but I think she needed a lot more. Petrie and I got out of there real quick. Anyway, he kept asking where you were. 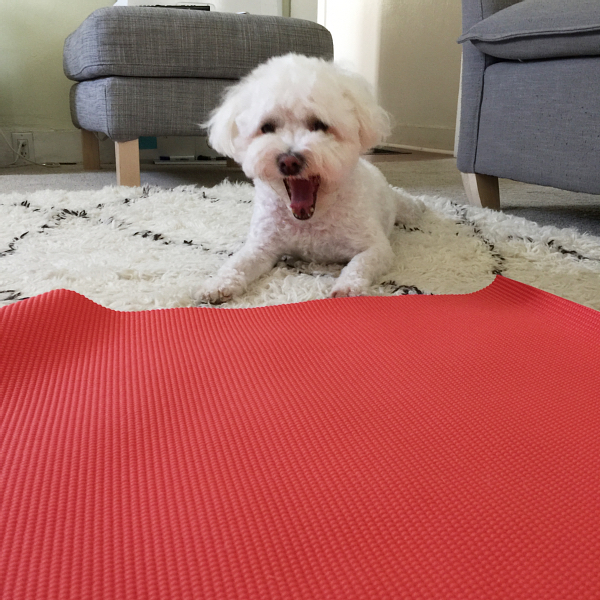 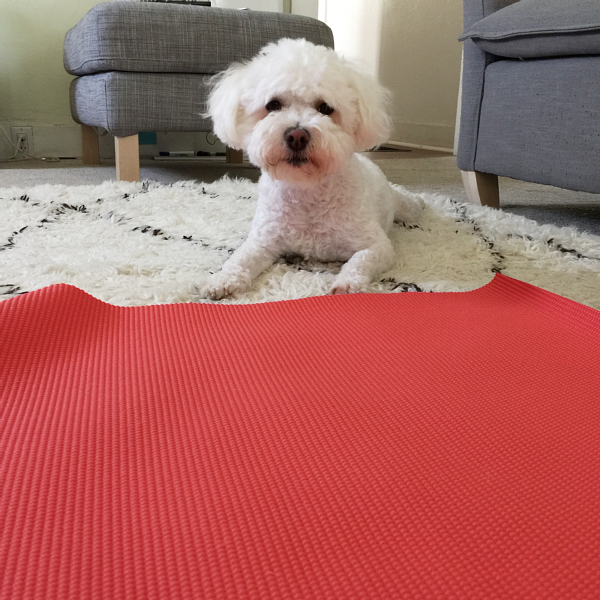 …and then just really sad and quiet when I told him it was for forever. He’s still trying to make sense of it.

We went on our annual trip to visit Stacy and Rob at the Mouse House in Capitola. This would have been our fifth year in a row. 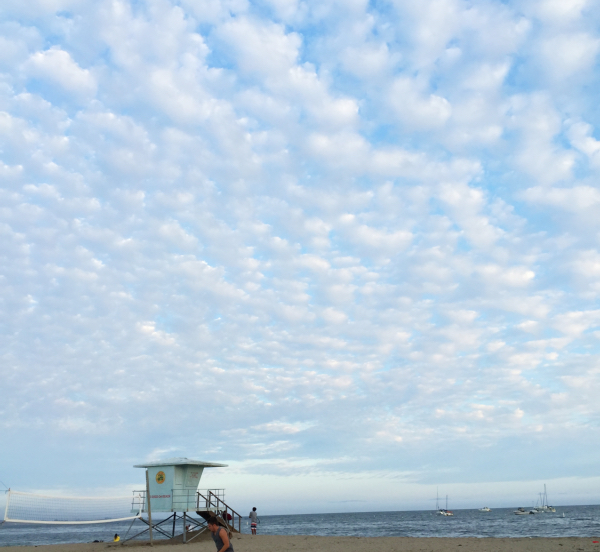 The clouds dotting the sky were beautiful. 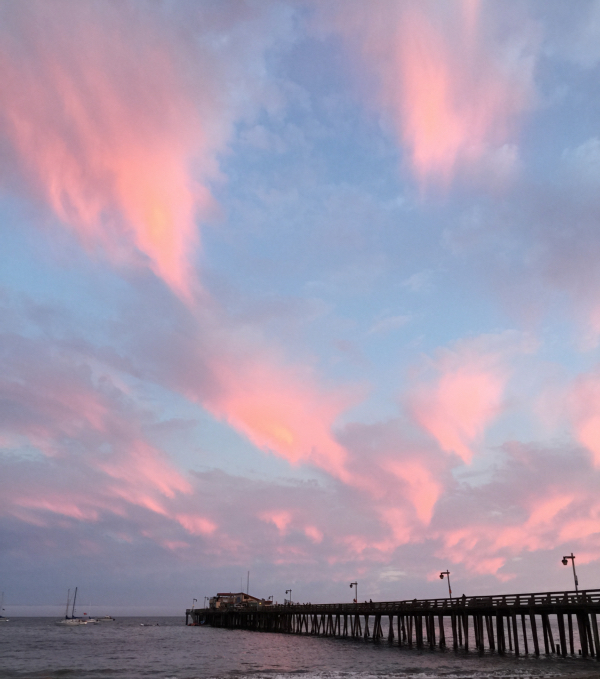 And then the sun set and the sky turned pink and purple and blue. It almost made me cry. 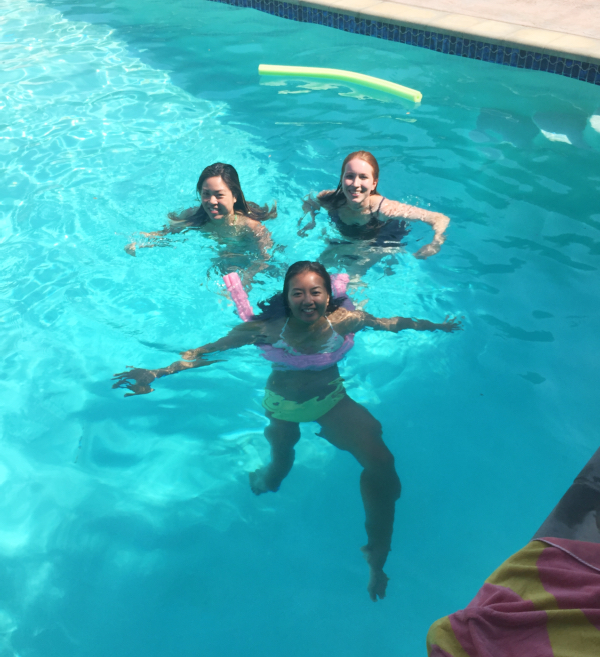 I’ve been swimming a lot at PJ’s. And Omeida took me swimming at the SJSU pool a few times. I’m getting so much better at relaxing; you’d be proud of me. I wore my snorkel a couple of times. Really nerdy, but I saw someone else do it and it makes swimming way funner. 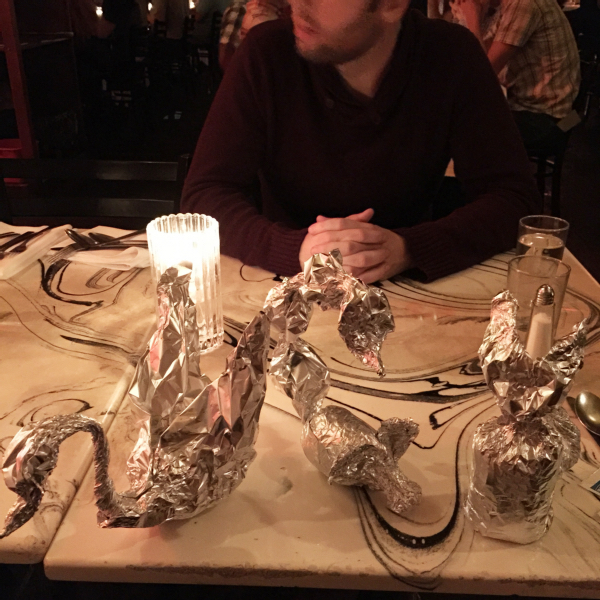 I went to this late-night restaurant in Portland for mac and cheese. They bring your leftovers wrapped up in aluminum foil shapes. I really wanted the three-foot sword (as I know you would have too), but I got a bunny. Lame. 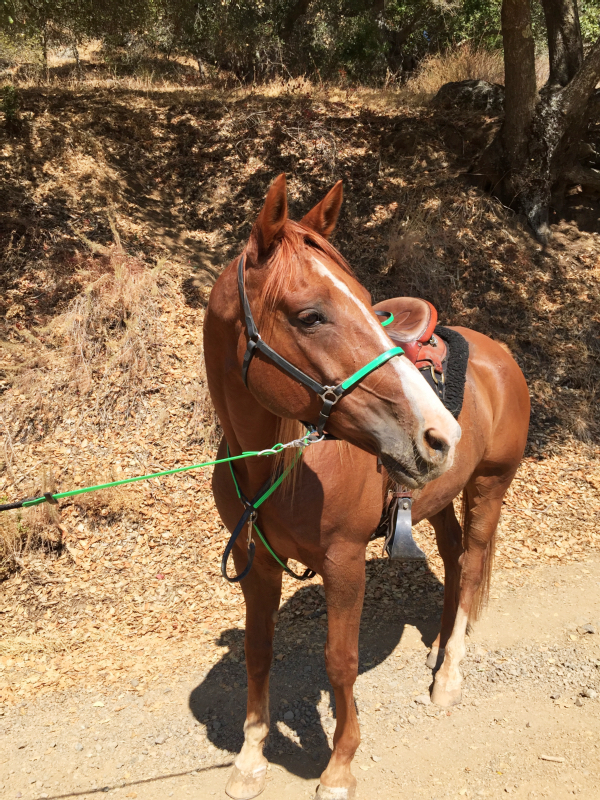 Omeida showed me a new trail at Quicksilver. I can’t believe how big the park is! She didn’t know about the trail we always do, so next time I’ll show her that one. It was really hot and sunny that day, but I loved it. It felt like summer was seeping deep into my bones.

I don’t know what I’ll do when the days are shorter, the light slips away faster and the darkness comes quicker. That’s further than two weeks away, so I’ll think more about that later.